That’s a Wrap! – The Night Mabel Came Out of the Grave

That’s a Wrap! – The Night Mabel Came Out of the Grave

That’s a wrap on the first segment of Hauntology, “The Night Mabel Came Out of the Grave!” It was an exciting process that went even better than expected, but it was also a learning experience.

Click here for more information on the segment itself, including cast, characters, and even a snippet of the script!

One thing we weren’t quite ready to share before production started was exactly who would be playing the titular Mabel. We have to keep an ace up our sleeve every now and then. 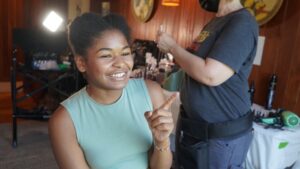 Production – The Night Mabel Came Out of the Grave

We shot this segment over the course of three days between Saturday, August 27 and Monday, August 29. There was also a half day’s worth of drone shooting that took place on Wednesday, August 24.

Thankfully, the weather held up incredibly well, with the precipitation gods deciding to limit rain to our lunch break and then after wrap on Monday. Plus, we got some excellent drone footage of rising mist, which will certainly add to the atmosphere of Mabel’s story.

Here’s a quote from our illustrious writer-director Parker Brennon, originally shared exclusively to our Kickstarter backers:

I can honestly say that our cast and crew had a fabulous time, and we love our beautiful footage. I feel more optimistic than ever about our film crew, and each one of the cast members is a joy. 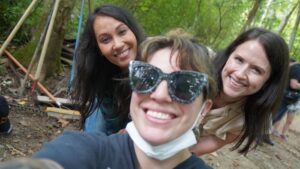 What’s Next for Hauntology?

Now that this segment is in the can, it has been delivered into the loving hands of our post-production team, which includes editor and colorist James Paul Bailey and composer Jonathan Snipes.

We’re also already in pre-production for our second segment, “Witchcraft Becomes Her,” so keep an eye out for more updates as October draws nearer!

Here are some thoughts from producer Rob Jarosinski on what we did well with segment 1 and how we’ll work to do even better on segment 2:

The big takeaway from the first segment shoot was how much all the extra prep work in making shot lists, doing walk through with crew, meeting with cast in advance, was crucial in building a common language and rapport. Everyone was on the same page which made things move smoothly. For the second segment, we’re going to double down and spend even more time on prep since we expect this shoot to be more complicated in some ways with a larger cast and overnight shoots. We’ll be ready!